engineered to take high-definition targeting to an entire new ground breaking level. With a compatible transducer, the GSD 26 sonar module spread Spectrum technology scans on more than one frequencies at once enabling it to transmit large amounts of information to the receiver. As a result, you'll will get accurate, shallow-water-like target separation with preciseness at larger depths – up to 10,000 ft (3,000 m).

Two Sonars in One with the Garmin GSD 26 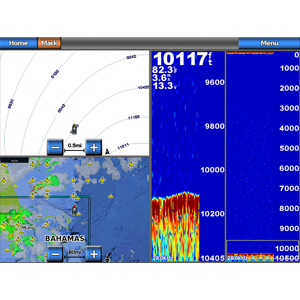 The GSD 26's dual-transceiver was engineeered and designed specifically for simultaneous along with independent transducer operation management.  You are the one in control over the information on screen visible on your compatible Garmin chartplotter, which easily connects to the GSD 26 over the Garmin Marine Network.

A traditional speedy frequency mode permits you to manually regulate frequencies. This is from 25 kilocycle per second to 210 kilocycle per second for increased targeting of all varied and specific fish species. Maximum power and clarity with this Garmin CHIRP Sonar Module. Professional results.  You’ll additionally regulate transmit power from 300 W to 3kW (of course this is entirely dependent on the transducer) for even a lot of management over your sonar returns.

Clearest Scanning sonar pictures on the WaterEnhance the resolution, target separation and clarity of the sonar on screen of fish and structure that pass below and to the beside the vessel by the simple addition of  CHIRP technology to ClearVü and SideVü scan sonar.

The GSD 26 Professional sonar module may be a remote network resolution that gives outstanding results with superior bottom tracking capabilities. It offers dual-channel one power unit CHIRP, and Garmin CHIRP ClearVü™ and Garmin CHIRP SideVü™ measuring instrument scanning for the clearest scanning pictures on the water. the pictures sent to your compatible Garmin chartplotter have target details thus clear and precise, you'll really discriminate between time bunched target fish at various fishing depths all the means right down to five,000 feet.

True Dual-Channel one power unit CHIRP
CHIRP is the most sophisticated sonar technology available on the market for the avid fishing and seafaring boat owners. CHIRP, put simply, is an acronym for the words “Compressed High-Intensity Radiated Pulse.”  What Garmin CHIRP true dual channel means to you is far higher target resolution, separation, clarity and crispness than the other sonar system. Having Garmin true twin one power unit CHIRP as your regular sonar gives you the opportunity to regulate CHIRP frequencies ie;  low/medium, low/high, medium/high to additionally enhance the Garmin sonar performance. Transducer sold separately.