A Port Macquarie owner buys a second-hand International Marine classic Bertram 35 found between these pages and tricks her out for hardcore fishing. 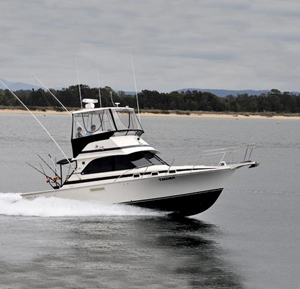 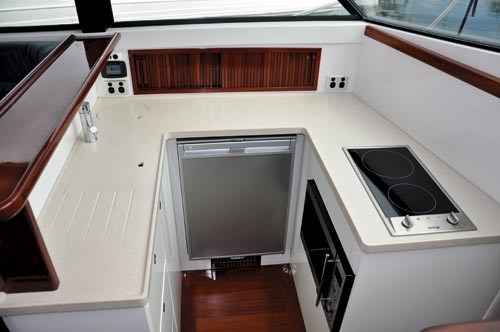 Port Macquarie-based Terry Nocelli is like a lot of owners in that he found a particular marque and became a lifelong fan. His first Bertram 35 Shotgun was a perfect example.

Originally an auto electrician, Terry concentrated on marine electronics with Shotgun Marine Services around 10 years ago. Sometime later, after 20 years in business, he figured he was due some R&R and North Queensland beckoned.

The faithful Bertie would be a little cramped for extended liveaboard cruises with the family, so it was reluctantly replaced with a Riviera 48 that was more suited to coastal cruising as well as fishing.

Watching the weigh-in at the 2009 Port Macquarie Golden Lure Tournament, Terry’s teenage son Kurt expressed a renewed interest in blue-water fishing, so the quest for a genuine fishing boat began. Terry favoured a do-upperer that he could fit-out himself rather than a turnkey package.

Whether a Bertram or of the locally built Caribbean lineage the 35 is a real multi-tasker, which is why examples of any vintage remain in such demand.

BETWIXT THESE PAGES
Ideally, Terry wanted another Bertie, but the right combination of boat and motors were hard to find. Then one day, flicking through the pages of Trade-a-Boat, he spotted his old boat for sale. The asking price was a bit rich but it had been repowered with Volvo Penta D6-330s, which were a step-up from the originals. Three months later the price dropped to $160,000 and it was time to act. He made an offer of $145,000 and his old pride-and-joy was soon on its way back to Port Mac.

Needless to say, at that price the old girl needed a bit of work, but Terry also wanted to change a few things. The boat spent the next nine months on the hard, completely stripped back to virtually a bare shell.

The hull had osmosis and the fibreglass fuel tank was also a mess. The tank was pressure washed, bigger baffles were installed and Lloyds-approved fuel lines replaced the existing ones.

The downstairs helm was done away with freeing-up plenty of storage and is also now home to a flatscreen that disappears beneath a flap in the dash.

A new 5kVa Northern Lights generator supplies AC power and running the air-conditioning away from shorepower, as well as a 1500W inverter. The wiring is immaculate, as you’d expect.

The props were replaced with four-bladers resulting in improved fuel efficiency and around 3kts of extra top-end speed. In a full day’s gamefishing, including running to the grounds at 20kts, Shotgun uses about 230lt, which is reasonably economical. At trolling speed of 8kts the motors burn 7lt/h per side.

LOCAL TRADIES
All the timberw.ork, upholstery, carpeting and clears were done locally in Port Macquarie, with just the Corian bench top made out of town.

While later-model Bertrams/Caribbeans have a reduced flare to create more space in the cabin, Terry’s is the original shape so he gets the legendary seakeeping abilities. The bed-and-a-half in the bow is still generous enough for two.

GAME COCKPIT
In the cockpit are new custom-built rodholders and a Flexiteek deck, which is relatively maintenance free and far cheaper than the real deal. The heavy-tackle gamechair is a custom design and its high-gloss finish complements the look of this beautifully restored gamefisher.

A plumbed bait tank, while only the width of the transom, has a surprisingly large volume. The divided icebox-freezer to starboard is also a custom job. There’s also another massive icebox under a hatch in the floor, just before the cabin doors.

FISHING CRED
Terry’s rekindled enthusiasm for gamefishing got off to a flying start. The boat is a proven fish-raiser as evidenced by the successful release of a 220kg blue marlin on a Stella 20000 reel no less!

It’s fair to say that the rebuild of this classic has been a labour of love, but plenty of thought has gone into every aspect of it. It will certainly have gamefishers and Bertram gamefishers in particular, drooling with envy.

[ELECTRONIC BANK]
Being a marine electrician you’d expect Terry’s boat to be kitted out with all the latest electronics. The Simrad BSM-2 broadband sounder and Simrad GPS fitted with Navionics Platinum chart cards running through two NSE 12S head units were this expert’s choice.

Terry deep-drops the continental shelf and beyond with electric reels and at these sorts of depths if you miss the spot it’s a long and boring wind-up with nothing to show for it. Factoring in wind speed and current direction, the incredible on-screen clarity provided by the BSM-2 makes bottom fishing in water hundreds of fathoms deep much more productive.
Otherwise the sounder’s role in highlighting where deep reefs, dropoffs and canyon walls lie equates to more gamefish bites when trolling or drifting.

A 6kW open array radar is perched on the hardtop, so this boat is equipped to go and fish anywhere, under a variety of conditions. 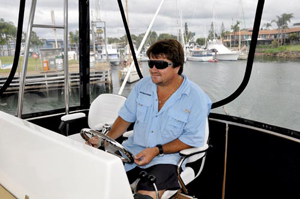 Who’s a happy chappy? Terry Nocelli is, back behind the wheel of his beloved Bertram 35. 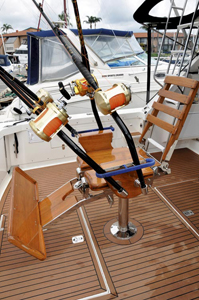 Fishing is the name-of-the-game on Shotgun, the stylish, custom-built gamefishing throne taking pride of place in the cockpit. 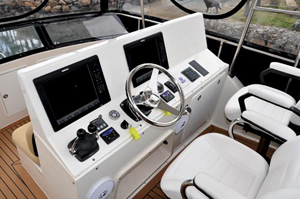 As you would expect Terry, being a marine electrician, has decked out the helm with some of the best electronics available. Nothing escaped the rebuild, the standard Betram U-shape dinette showing the benefit of some meticulous TLC.